Facebook Status Updates: Why Are Companies Investing Their Time In Them? 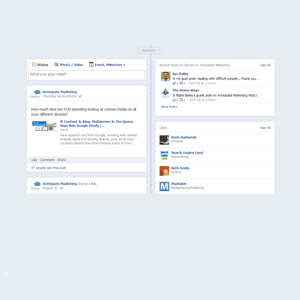 As part of a well rounded social media campaign, social media marketers spend time putting seemingly trivial Facebook updates on the company pages. Sometimes there will be pictures of the company staff and sometimes there might be a cultural reference that the social media person decided to take and put a unique spin on, to garner likes and customer engagement.

Unless a particular Facebook update is promotional in nature, one may come to ask the following question; why are these updates relevant and why would I consider hiring someone to post similar social media updates for my company; posts that don’t relate to my product or service?

The answer lies in the fundamental psychology of branding. The reason to have updates that don’t relate to your product on Facebook is the same reason that TV commercials for cars will sometimes have a popular song as the background to the commercial and the same reason that for slogan’s that don’t describe a brand. The concept is one which I refer to as the stickiness concept. The stickiness concept refers to the level of resonance that a particular brand image or brand message will have with it’s customers relative to its competitors brand image or brand message.

Let’s look at an example. Take Pepsi and Capital One as our 2 brands (although they are not part of the same market, the stickiness factor can be demonstrated nonetheless). Now let us compare the stickiness factor of Pepsi’s tagline “you’ve got the right one baby”, with Capital One’s “what’s in your wallet?”. I believe that 10 years ago, Pepsi’s tagline was very sticky, whereas nowadays, this is not the case. If you were to ask the average American consumer whether or not they can recall the Pepsi tagline from the 90’s, I don’t think it would be easy for all of your participants to recall the particular slogan mentioned above. Conversely, I think that the average American consumer would be able to easily point to “what’s in your wallet?” as the prevalent tagline of Capital One.

Now let’s translate the stickiness factor to Facebook updates. Consumers, who have liked your company page and have opted to see your updates in their streams, have already shown you that they are interested in your product or service. Now with consistent updates that share a theme, voice or style, you can capture the same type of trust and established image that you would get with a consistent tagline or brand message.

<<Free Tools & Templates For eBooks And Infographics
Warning: Use of undefined constant next_post_link - assumed 'next_post_link' (this will throw an Error in a future version of PHP) in /homepages/22/d312393700/htdocs/wordpress/wp-content/themes/AvaLance/single.php on line 24
Your Hotmail Has Been Upgraded To Outlook.com>>