What Do Amy Raisman, The Numa Numa Guy and Oreo Cookies Have In Common? 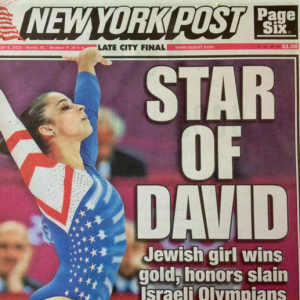 Over the past week, many American Jews and many Jewish media outlets were ecstatic at the Olympic gold medal finalist, Amy Raisman’s recognition of her Jewish roots and her recognition and support for the victims of the Munich massacres (read full story here). Of note were her floor routines that Aly conducted to the tune of “Hava Nagila” and her support for the victims of Munich and the moment of silence which many family members of the victims and sympathetic followers have requested from the International Olympic Committee (IOC).

What is interesting to note is the fact that Aly Raisman did not choose the song Hava Nagila, because of the anniversary of the massacre and that she did not proactively decide to address the moment of silence issue, but was rather questioned about it, to which she replied that “she would have supported it”. Nonetheless, she still became an icon of hope for the Jewish people overnight. I’ll get back to this point.

Let’s go back in time to the Numa Numa guy (that’s the name I remember him by)? Remember him? If not, that’s OK. After all, the youtube video first went viral back in 2006. Check out the video below. I don’t think that when the Numa Numa guy videotaped himself doing his spiel to the Numa Numa song, he thought that he would become the icon of viral youtube video, or that he would be the image that people would come to associate with that song, but that’s exactly what happened.

Now let’s talk about the big controversy that Oreo recently stirred with its Facebook  picture of the rainbow cookie, during the gay pride month (read full article here). If you scan through the other pictures in Oreo’s facebook profile, you’ll notice similar pictures of cookie designs that they created to represent certain milestones or occurrences in the world. The rainbow cookie picture that they posted was not FOR the LGBT community, but was rather part of a “series of daily ads reflecting current events in a fun way using images of OREO cookies and milk,” as Basil Maglaris, a spokeswoman for Oreo’s parent company Kraft Foods, said in a statement regarding the matter.

So what’s the connection and what you learn from all of this? The connection is that all of these stories share the fact that the perona or brand of interest was significantly thrust into the spotlight as a result of circumstances that happened irrespective of them. I don’t believe that Amy Raisman thought that the Munich massacre that took place 40 years earlier would add to the fame that she received for her gold medal. Similarly, my understanding is that the Numa Numa guy and Oreo cookies did not anticipate the media attention that they received after their social comments social comments on the circumstances mentioned above. The take-home for marketers of today’s social environment: take advantage of the news, trends and hot topics to make comments and play on the hysteria and hype of the times.

You don’t need to go overboard and try and justify a side of an argument and you don’t need to piss people off with your comments or creativity, but having a voice about trending topics and how they relate to your industry will give your brand a unique voice among younger and more engaged consumers. Just be careful to keep it light and not piss anyone off, like the Chick-fil-A people did. Your goal should be to engage your consumers, not create a rift among your target audience.

<<Learning To Budget Your Time
Warning: Use of undefined constant next_post_link - assumed 'next_post_link' (this will throw an Error in a future version of PHP) in /homepages/22/d312393700/htdocs/wordpress/wp-content/themes/AvaLance/single.php on line 24
Which Elements Do Good Landing Pages Consist Of?>>